/* */ /* Mailchimp integration */
2121
post-template-default,single,single-post,postid-2121,single-format-standard,stockholm-core-1.0.8,select-child-theme-ver-1.1,select-theme-ver-5.1.5,ajax_fade,page_not_loaded,menu-animation-underline,header_top_hide_on_mobile,wpb-js-composer js-comp-ver-6.0.2,vc_responsive
October 31, 2022 In In The News

GETTING GOVERNMENT OUT OF THE WAY OF NEW HOUSING

“GOVERNOR GIANFORTE’S HOUSING TASK FORCE HAS OUTLINED SEVERAL SERIOUS PRO-HOUSING REFORMS THAT WILL GO A LONG WAY TO BOOSTING THE SUPPLY OF HOMES THAT WORKERS, RENTERS AND YOUNG FAMILIES CAN ACTUALLY AFFORD.”

Over the last few months our CEO & President, Kendall Cotton has represented the Frontier Institute in Governor Gianforte’s Housing Task Force. And after a lot of hard work from members, the initial draft of recommendations was released earlier this week.

The overwhelming majority of solutions focus on removing the current government barriers to housing, but these can be broken down into 3 overarching themes.

Six recommendations suggest the Montana Legislature directly address state and local regulatory barriers to increasing housing supply by streamlining permitting, placing sideboards on local zoning and broadly restoring the rights of landowners throughout Montana cities to build attainable forms of housing, particularly in areas where existing infrastructure can be maximized through infill development.

While this is just an initial draft of potential recommendations, we are pleased with the overall direction of the task force so far, especially the heavy focus on regulatory reform. Here’s Kendall’s statement on the draft:

“Governor Gianforte’s Housing Task Force has outlined several serious pro-housing reforms that will go a long way to boosting the supply of homes that workers, renters and young families can actually afford,” said President & CEO Kendall Cotton. “I look forward to listening to the public’s comments and working with the task force to refine the recommendations.”

Stay tuned as I continue to keep you updated on these reforms.

Updates On Licensing Reforms
Last week, the Department of Labor and Industry published its initial draft on potential occupational licensing reforms. Among these proposals are changes that would restructure board governance to mitigate conflicts of interest, increase the department’s ability to recognize licenses from states with similar requirements to Montana and the creation of provisional licenses.

Our Take: These reforms follow our recommendations we laid out in our Health Care Policy Playbook. If implemented, these reforms will go a long way toward expanding access to care throughout Montana.

Does ‘Infill’ mean the end of rural America?
In an article published this week by the Foundation of Economic Education, the author suggests that legalizing denser infill housing is the best way to accommodate everyone’s housing preference. By legalizing infill, people who prefer that option are free to do so, freeing up land that would otherwise be used for urban sprawl. Under our current overly strict zoning new housing would look much like figure 1, but when infill is legalized (figure 2), it actually frees up more rural land. 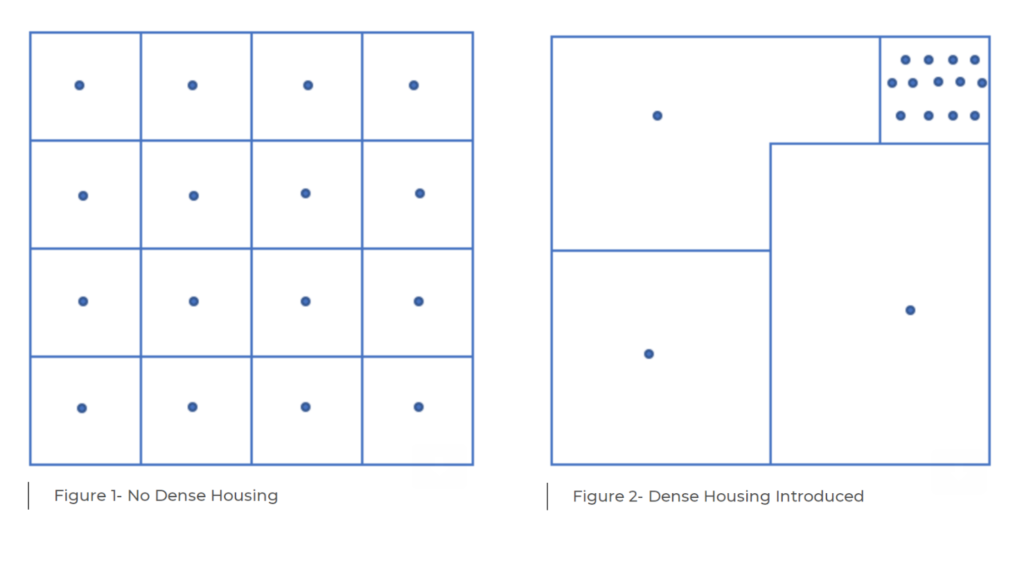 Our Take: Removing government barriers so that people are more free to live their life as they see fit is always a good policy. Allowing for infill doesn’t mean the destruction of rural Montana, but it does mean we can begin to address the housing shortage without having to lose the things we love about Montana.