/* */ /* Mailchimp integration */
2050
post-template-default,single,single-post,postid-2050,single-format-standard,stockholm-core-1.0.8,select-child-theme-ver-1.1,select-theme-ver-5.1.5,ajax_fade,page_not_loaded,menu-animation-underline,header_top_hide_on_mobile,wpb-js-composer js-comp-ver-6.0.2,vc_responsive
October 7, 2022 In In The News

Delaware’s Mix of Businesses has Changed – Regulations Need to Change

In the late 1990s, Delaware’s economy was known for the “four C’s” – Chemicals, Chickens, Cars, and Credit Cards, and big business thrived. By 2000, Delaware had 113 business entities across the state that each employed more than 500 people, mainly in those four industries, but then Delaware changed.

The following decade wreaked havoc on three of the C’s – Chemicals, Cars, and Credit Cards – and the most recent decade has not seen any rebound. By 2020, the number of businesses employing more than 500 people had dropped by 22.1% (by 25 companies) to only 88 companies. 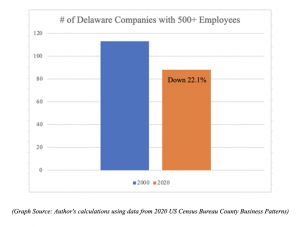 During this same time when “big business” shrank its footprint in Delaware, small businesses struggled to gain a footing. In 2000 there were 13,610 businesses with fewer than five employees in Delaware. Today that number is 15,499. 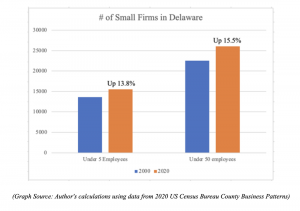 Despite the last 20 years of a radically shifting employer mix, the state’s regulatory environment continued to expand dramatically.

Today, according to the Mercatus Center at George Mason University, Delaware’s 2019 Administrative Code (DAC) “contains 104,562 restrictions and 6.7 million words. It would take an individual about 374 hours-or more than nine weeks-to read the entire DAC. That’s assuming the reader spends 40 hours per week reading and reads at a rate of 300 words per minute.”

To put this into further context, there are almost seven times more regulations than there are Delaware employers with fewer than five employees. Yet, when one of these micro-businesses needs to upgrade an air conditioner or look for expansion space, the full force of these regulations slows and often stops their investment. 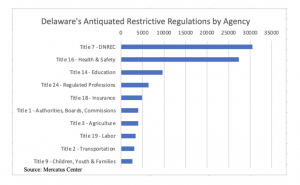 While this mismatch in regulations is already stark, Governor Carney had recently introduced Senate Bill 305 (which did not pass out of Committee) and would have empowered DNREC to grow the regulatory burden on small businesses even more than it already has.

At CRI, we want to be clear; we believe that the creation and oversight of regulations for health and safety – including appropriate environmental regulation – are a central role for government.

But, over time, the government continually adds regulations but rarely removes outdated ones. In Delaware’s case, many existing regulations are aimed at businesses that largely no longer exist in the State (e.g., according to the latest report in 2019 by the Mercatus Center, there are almost 21,000 regulations on chemical manufacturing, an industry almost entirely gone from the state). But the army of bureaucrats devoted to these existing regulations still takes taxpayer money from higher priority areas like education and mental health.

Previous CRI analyses have exposed New Castle County’s economy is smaller today than it was twenty years ago and that Delaware’s aging demographics are making economic growth even more problematic in the state.

Regulatory updating can refocus Delaware’s government on what is important to current and future citizens while freeing small businesses from wasting resources on outdated rules which ensnare them in a bureaucratic morass, slowing or even, in the case of New Castle County, stopping economic growth.

We recommend that Governor John Carney sign an executive order mandating that before a new regulation can be added, two regulations must be removed. Let’s help Delaware’s small businesses help themselves and their employees.