/* */ /* Mailchimp integration */
1934
post-template-default,single,single-post,postid-1934,single-format-standard,stockholm-core-1.0.8,select-child-theme-ver-1.1,select-theme-ver-5.1.5,ajax_fade,page_not_loaded,menu-animation-underline,header_top_hide_on_mobile,wpb-js-composer js-comp-ver-6.0.2,vc_responsive
August 11, 2022 In In The News

Inflation continues to rise to historic heights, and rapidly rising state minimum wages appear to be adding fuel to the fire. As employers feel the pinch of operating costs rising on many fronts, Bureau of Labor Statistics (BLS) data shows areas with steeper minimum wage mandates have higher inflation rates for food purchased in restaurants or take-out establishments.

The Bureau of Labor Statistics collects data on inflation through growth in the consumer price index (CPI), which measures price increases for goods commonly purchased by the average consumer. BLS also measures inflation by specific categories of goods, including food prices both “at home” including groceries, and “away from home” which includes various take-out, fast-food dining, and full-service meals.

As the restaurant industry historically employs the majority of minimum wage earners, rising mandates are most likely to affect price increases in restaurant establishments in this “away from home” category.

West Coast states have had notoriously high minimum wage requirements – reaching $15 per hour this year in California and $14.49 per hour in Washington. Despite experiencing similar levels of overall inflation (i.e. CPI increase for “all items”), these West Coast areas have experienced inflation for food away from home as much as 10 percentage points higher than areas that have not raised their mandate above the federal minimum requirement of $7.25 per hour.

While each group (high wage states and $7.25 wage states) each experienced overall inflation averaging 20% from 2017 to 2022, inflation of food away from home was significantly different. The CA and WA regions experienced on average a 25% increase in prices of food away from home, compared to less than 18.7% increases for Georgia and Texas regions abiding by a $7.25 minimum wage and a $2.13 tipped wage. 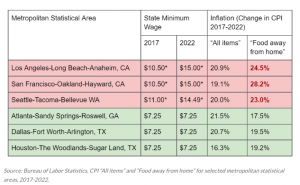 Looking at inflation over the last decade reveals this trend is not a recent fluke. California’s state minimum wage has risen by 88% since 2012, and Washington state’s rose by 60% over the same period. Inflation in these areas is up to 20 percentage points higher for food away from home since 2012 compared to states mandating the federal minimum wage. 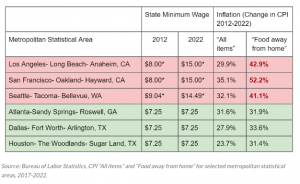 This finding concurs with existing economic research on the link between minimum wage mandates and inflation cycles.

One review of the existing economic literature on the inflationary effects of wage hikes finds a 10 percent minimum wage increase raises prices by up to 0.3%. Another study by the American Enterprise Institute found the same wage hike could cause more dramatic inflation in the southern U.S. – up to 2.7% increases in price. A Stanford University economist also found raising the minimum wage drives the largest price increases for the poorest 20% of families.