/* */ /* Mailchimp integration */
1848
post-template-default,single,single-post,postid-1848,single-format-standard,stockholm-core-1.0.8,select-child-theme-ver-1.1,select-theme-ver-5.1.5,ajax_fade,page_not_loaded,menu-animation-underline,header_top_hide_on_mobile,wpb-js-composer js-comp-ver-6.0.2,vc_responsive
June 9, 2022 In In The News

Rainy day funds, also known as budget stabilization funds, grew in more than two-thirds of states — 35 — during fiscal 2021, according to figures reported to the National Association of State Budget Officers (NASBO). A slightly greater number of states—36—posted increases in the number of days they could run government operations using rainy day funds alone compared with the previous year.

Pew’s website allows for graphical representations of longer term trends from the data. Look at how Kentucky moved past the 50-state median from FY ‘20 to FY ‘21: 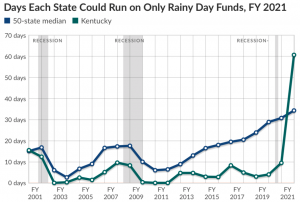 Based upon the FY ‘21 figures, Kentucky ranked 12th among the states with the strongest budget reserves relative to their total spending. (Note from Pew on their metric to compare states: “One way to standardize the size of reserves and balances is to calculate how many days a state could run solely on those funds, even though the scenario is highly unlikely.”)

Frankfort’s arrival at a bipartisan Rainy Day Fund consensus has been impressive. It should not, however, be taken for granted.

For decades, government spending has been the first prerogative in Kentucky’s state capital. Establishing sufficient budget reserves to deal with cyclical revenue fluctuations or to prepare for unforeseeable circumstances hasn’t been a high priority.

This seems to be changing, due in no small part to the leadership of the current chairmen of the legislature’s Appropriations and Revenue Committees.

The next critical task is developing a statutory framework around the budget reserves. It must become more than an account with money tucked away. Instead, the Rainy Day Fund should become a program with clear guidelines on how to manage it, in good times and in bad.