/* */ /* Mailchimp integration */
1811
post-template-default,single,single-post,postid-1811,single-format-standard,stockholm-core-1.0.8,select-child-theme-ver-1.1,select-theme-ver-5.1.5,ajax_fade,page_not_loaded,menu-animation-underline,header_top_hide_on_mobile,wpb-js-composer js-comp-ver-6.0.2,vc_responsive
May 23, 2022 In In The News

DOVER – Delaware’s unemployment rate was unmoved for the first time in months in April, while adding 500 net jobs, according to state officials.

The labor force captures not only workers and those receiving unemployment benefits, but also those in search of work who aren’t receiving assistance. As workers stop seeking work, for a variety of reasons ranging from retirement to child care needs, they are no longer counted as being unemployed in the state.

Delaware’s April unemployment rate remained at 4.5%, and was still significantly higher than the national average, which also stalled at 3.6% last month. 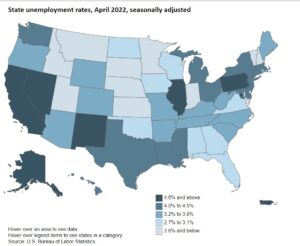 In June, Delaware’s rate was lower than the national average, but the state has since steadily fallen behind in its recovery. It ranked 43rd in unemployment rate among states in April, according to U.S. Bureau of Labor Statistics data. It was tied with New York, but has fallen behind New Jersey and Maryland, which ranked tied for 33rd and 38th at 4.1% and 4.2%, respectively. Pennsylvania continues to have higher rates of unemployment, ranking 47th with a rate of 4.8%. Nebraska and Utah remain tied at the lowest rate of 1.9%, while New Mexico had the highest at 5.3%.

The Delaware Department of Labor’s report is taken monthly during the calendar week that contains the 12th day. The state recorded 22,400 unemployed last month, a decrease of 200 people over March.

The official monthly unemployment figure is created by looking at continuous unemployment insurance claims as well as a U.S. Bureau of Labor Statistics survey of residents on their employment status. It tracks not only those receiving benefits, but also those who are ineligible, such as terminated employees, those who have resigned and the self-employed, who only became eligible for assistance under a special federal program established under the CARES Act.

The state’s three counties saw differing rates of unemployment in April, with New Castle, Kent and Sussex counties reporting rates of 4.3%, 5.1% and 4.2%, respectively – although those statistics aren’t seasonally adjusted. Wilmington and Dover, the state’s two most populous cities, have seen an even greater impact in job losses, where 6.4% and 6.9% of workers were unemployed, respectively.

Leading job losses was the professional and business services sector, which lost 700 jobs, while unsorted industries lost another 300 and financial activities shed 200 jobs.