/* */ /* Mailchimp integration */
1804
post-template-default,single,single-post,postid-1804,single-format-standard,stockholm-core-1.0.8,select-child-theme-ver-1.1,select-theme-ver-5.1.5,ajax_fade,page_not_loaded,menu-animation-underline,header_top_hide_on_mobile,wpb-js-composer js-comp-ver-6.0.2,vc_responsive
May 19, 2022 In In The News

When thinking about moving to another place, healthcare is one of the most important things on your mind. Access to healthcare and quality of service varies around the world, and even within the United States.

While Medicare provides senior citizens with access to healthcare, a lack of providers can lead to long waiting times for appointments in different states, and healthcare spending can impact standards.

We wanted to find out the best countries in the world and states in the United States for healthcare, so looked at healthcare spending and healthcare providers among other factors.

The Best Countries for Healthcare

France’s universal healthcare system is often referred to as one of the best in the world. With the highest overall spending on healthcare out of all EU member states, it’s no surprise that France ranks in first place on our list.

France has 44.73 hospitals per million residents, higher than any other country we looked at, aside from Australia, Japan, and South Korea. France also has 6.5 physicians per 10,000 of the population, beaten only by Italy.

Switzerland’s healthcare system is world-famous, commonly regarded as one of the highest quality healthcare systems in the world, renowned for its extensive network of practitioners and clean hospitals.

Switzerland ranks in second place in our study, with a healthcare spending of $7,138 per capita, beating every other country we looked at except the United States.

In third place, Germany has one of the best healthcare systems we looked at.

With spending of $6,731 per capita on healthcare, it’s no wonder Germany has such a good reputation for its quality of healthcare.

Germany has 36.42 hospitals per million inhabitants and 4.3 physicians per 10,000 inhabitants. Germany has a Logistics Performance Index healthcare score of 16, higher than most countries on our list.

The Worst Countries for Healthcare

Turkey is the worst country for healthcare out of all countries on our list, scoring 1.14 out of 10 across all factors.

Turkey’s healthcare spending is $1,267 per capita, lower annual spending than every other country we looked at except for Mexico. There are just 1.8 physicians per 10,000 Turkish inhabitants, the lowest out of all countries on our list, and 18.62 hospitals per million inhabitants.

Hungary’s healthcare system is one of the lowest scoring on our list, over all the factors we looked at.

Hungary spends around $2,170 on healthcare per capita each year and has a Logistics Performance Index health score of 51.

There are just 16.68 hospitals per million inhabitants in Hungary and 3.4 physicians for every 10,000 residents.

Latvia is one of the lowest-scoring countries on our list, scoring 2.5 out of 10 for the factors we considered.

Latvia’s yearly spending on healthcare per capita is $2,039 and its Logistics Performance Index health score is one of the lowest on our list, at 72. Latvia has 31.87 hospitals per million inhabitants, and 3.3 physicians per 10,000 of the population. 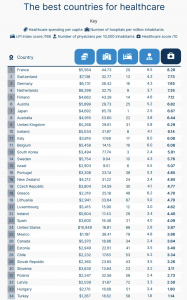