A huge benefit to working for the state: a pension. But what if your pension is unfunded—and has been for years? Not only should state employees be concerned about their future retirement, but lawmakers and taxpayers should pay attention to what may be a looming fiscal crisis.

Delaware’s $1.9 billion in unfunded pension benefits have been largely ignored for years. This total is massive: for perspective, our pension debt is more than a quarter of the state’s annual budget. Instead of addressing it, lawmakers continue to eye pet projects and kick the can down the road. Their willing ignorance to the issue is not sustainable or beneficial for the state. 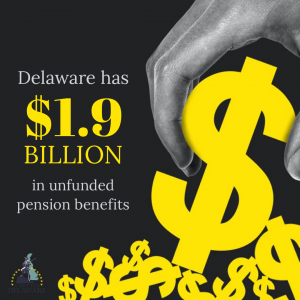 Delaware’s fiscal condition is ranked 44th in the nation, in part due to its unfunded pension deficit, and is why Truth in Accounting’s audit of Delaware’s financial situation resulted in an F grade.

Last year’s surplus of $200 million would cover 10% of the state’s pension debt, and only 1.7% of the overall state debt of $12 billion. Each Delaware taxpayer would need to contribute $24,000 in order to offset the debt.

Federal data shows that public pension debt nationally is increasing much faster than the growth of the economy, and state and local government pensions have failed to fully fund the new benefits earned by employees each year, let alone address current debts.

Part of the issue stems from repeated pushing for increased benefits in terms of health care and pensions in addition to increased wages and salaries. Additionally, governors and legislators often lack the courage to set aside the amount of money their analysts told them the state would need to add into the pension funds. Delaware is no exception here.

Delaware will eventually be obligated to pay its pensions, but may not have the money to pay for them when that day comes. That would hurt other budget items if money needs to be shifted to cover pensions, or will hurt taxpayers if they are asked to pay more.

In an interview, Warren Buffett explained the effect this issue might have on individuals and companies looking to establish themselves in a state with underfunded pensions:

“I say to myself, ‘Why do I wanna build a plant there that has to sit there for 30 or 40 years?’ Because I’ll be here for the life of the pension plan, and they will come after corporations, they’ll come after individuals…[T]hey’re gonna have to raise a lotta money.”

Chicago, which also has a pension problem, handled it just how we hope to avoid in Delaware. Mayor Rahm Emanuel initiated numerous taxes, from a large property tax hike in 2014 to a 911 communication tax. These taxes resulted in the average Chicagoan paying around $1,700 more in taxes each year.

People vote with their feet, and Delaware is already teetering on shifting into an exodus with a poor education system, a bad business climate, one of the highest income taxes in the nation, and more taxes on the table. If our lawmakers continue to ignore this issue, we could be facing a real problem.

With a current surplus from massive federal stimulus, and more money potentially on the way, Delaware could address its current unfunded debts without forcing future generations to foot the bill. This would leave the state prepared to manage new pensioners and forge a better path for the state’s budget.