One Program is A Quarter of Delaware’s Budget!

Delaware’s budget has some glaring issues that lawmakers continue to ignore: unfunded pension benefits, an anemic Rainy Day Fund, and the ballooning cost of Medicaid. In light of COVID-19 and the recent spike in healthcare demand it created, Medicaid may be the issue lawmakers need to tackle first.

Delaware’s Medicaid problem started before COVID: according to the Federal Bureau of Labor Statistics, the cost of healthcare has been rising at a pace 5.2% per year. This is concerning as it is higher than the 1.4% inflation increase over recent years. Delaware’s spending on healthcare for Fiscal Year 2021 has been estimated at nearly 40% of the state’s budget.

This is a dramatic increase from the historic 17% that Medicaid used to claim of Delaware’s budget. Currently, 59% of Delaware’s Medicaid program comes from the federal government, which is scheduled to decline slightly in the near future.

Since its start in 1965, Medicaid funding has been a joint state and federal effort. The federal government creates the ground rules for state participation in the program in exchange for large subsidies to the states. Before the Affordable Care Act (ACA), states received a “match rate” based on states’ per capita income, where higher-income states had a 50% match rate, and lower-income states received higher percentages. Each state then funds the difference with general state revenues and taxes on health care providers.

This has wrecked state budgets.

The Associated Press says that California expected 800,000 new enrollees after the state’s 2013 Medicaid expansion, but wound up with 2.3 million. Enrollment crushed estimates in New Mexico by 44%, Oregon by 73%, and Washington state by more than 100%. The additional enrollees equal additional costs.

Rhode Island has one-quarter of its population on Medicaid, and the program consumes roughly 30% of all state spending. To fix this growing problem, Rhode Island has levied a 3.5% tax on insurance policies sold through the state’s ObamaCare exchange. Delaware’s Medicaid burden is even higher at almost 50%: so what will that mean for taxes here?

States increased their FY 2015 spending by the biggest margin in more than 20 years, due to huge leaps in Medicaid spending under the first full year of the ACA. The national cost of the $500 billion program is expected to rise to $890 billion by 2024.

Just like many other areas, more money doesn’t mean better outcomes. Around 55% of doctors in major metropolitan areas refuse to take new Medicaid patients and Medicaid enrollees who do find a way to see a doctor typically experience outcomes worse than those under private insurance: more in-hospital deaths, more complications from surgery, worse post treatment survival rates, and longer hospital stays than similar patients with private insurance. Often the only place a Medicaid enrollee currently can get healthcare is in an emergency room or hospital, both of which are very expensive to the system.

The answer that will seem the most logical to Delaware lawmakers will be to increase taxes, but this is an unsustainable model. As the cost grows, so will taxes—for as long as it continues to expand, which may be indefinite without reform. 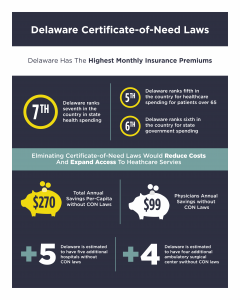 A better answer to this problem is to repeal Delaware’s outdated and harmful Certificate-of-Need laws, also known as the Delaware Health Resource Board. This entity drives up costs and limits access to care. Without this in place, Delaware could save $270 per capita in healthcare costs and could add 5 more hospitals to serve its residents. With cheaper and more accessible healthcare, there may be another option available for some Medicaid enrollees, and some of Delaware’s budget that could instead go towards other necessary programs, or even result in lower taxes on residents who are already seeing increased taxes with a poor taxpayer return on investment.

The time is now to address our ballooning Medicaid issue.