A draft of a bill to raise the minimum wage to $15 an hour by 2026—which would amount to a 61.6% increase—has been drafted and circulated for co-sponsorship. In light of a potential federal $15 minimum wage looming ahead, let’s look at the impact this would have.

A minimum wage increase of only $1 an hour can cost small businesses tens of thousands of dollars in additional payroll costs each year. This bill would force businesses let employees go if and when the minimum wage rises in their state, and prevent them from hiring new workers and expanding their business.

More than 163,000 Delaware workers have filed for unemployment assistance in the wake of the pandemic, with no sign of things returning to normal anytime soon. The minimum wage increase at this time would only drive more unemployment as Delaware businesses would be forced to lay off workers.

Less workers means less money circulated in the economy, less tax revenue, and less overall growth. Increased unemployment also contributes to domestic violence, mental health issues, obesity, and more. This should not only be seen as an economic issue, but a health concern as well.

Feel good policy isn’t always good. In this case, it hurts the very people it claims to help: low-wage and low-skill workers, disabled workers, former inmates, and more. These workers rely on low-skill and low-wage jobs that will now go to more experienced and attractive candidates as businesses will be looking to get what they are paying for in an employee. 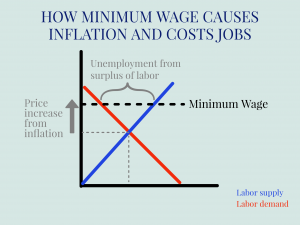 Anyone who has studied basic economics can explain the price floor mechanism that is minimum wage, and how it directly results in increased unemployment and inflation. Prices will rise and goods will become too expensive for most, and the new “livable wage” will no longer be livable. In 5 years, will we be confronted with another government mandated market shift that will warp buying power and job security?

It doesn’t stop there. Small business cannot afford the same minimum wage increase that major corporations like McDonald’s and Amazon have already enacted internally. As big companies shift multi-billion dollar revenues around to account for the higher wages, small businesses are left scrambling.

The Delaware restaurant industry has had a particularly tough time during the pandemic, and would be crushed by a mandate like a minimum wage increase for at least a few years. It took the First State six years to recover from the 2008 recession. Despite the numbers being far worse than twelve years ago, the new minimum wage would start in just one year. Our small businesses and low-skill and low-income workers would have no chance.

It is interesting that the same people who want to stop the growth of these mega corporations also support a measure that would directly benefit them and hurt their competition. Rather than address the causes of these high living costs, proponents of $15 minimum wage want businesses to bear the cost of the problem.

Make no mistake, the very people pushing for $15 understand the consequences this mandate presents. When signing California’s $15 minimum wage into law, California Governor Jerry Brown said that “Economically, minimum wages may not make sense. But morally, socially, and politically they make every sense.”

Delaware may not have a choice in the matter if the federal mandate passes. However, if that does not happen and the bill comes forward for a vote this session, Delaware lawmakers can either look at the evidence and decide to help Delaware workers and businesses, or vote based on rhetoric and make matters worse. shouldn’t join just to feel good. Increasing the minimum wage in the midst of a pandemic that crippled the workforce and businesses alike is not in the best interest of anyone but their own re-election.