COVID won’t be the only job killer with this bill

Delaware lawmakers wasted no time preparing for the 2021 Legislative session after the election. One may think the priority would be to help Delaware businesses and workers recover from the impact of COVID—19. Unfortunately, you’d be mistaken, since one of the first bills being circulated is legislation that would actually do the exact opposite.

A draft of a bill to raise the minimum wage to $15 an hour by 2026—which would amount to a 61.6% increase—has been drafted and circulated for co-sponsorship. If you thought COVID took jobs and hurt our small businesses, just wait until this upcoming session. 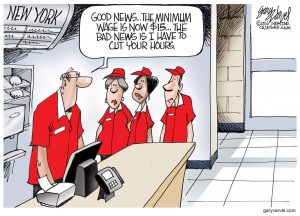 The Delaware restaurant industry has had a particularly tough time during the pandemic, and would be crushed by a mandate like a minimum wage increase for at least a few years. It took the First State six years to recover from the 2008 recession. Despite the numbers being far worse than twelve years ago, the new minimum wage would start in just one year.

Our small businesses and low-skill and low-income workers would have no chance, though one is desperately needed. When asked about this, Central Delaware Chamber of Commerce President Judy Diogo told Delaware Live, “It’s going to take [Delaware businesses] a couple of years to recuperate from [COVID—19]. They are not going to get over that in a year. So we need to give them some time to get past that, but we also do not believe the state’s government should be mandating wages.”

Business groups aren’t the only ones who understand this. Make no mistake, the very people pushing for $15 understand the consequences this mandate presents. When signing California’s $15 minimum wage into law, California Governor Jerry Brown said that “Economically, minimum wages may not make sense. But morally, socially, and politically they make every sense.”

Feel good policy doesn’t always do good. In this case, it hurts the very people it claims to help: low-wage and low-skill workers, disabled workers, former inmates, and more. Prices will go up and goods will become too expensive for most and the new “livable wage” will no longer be livable. You cannot mandate a market shift.

Florida and Maine recently joined the list of places with a $15 minimum wage. Delaware shouldn’t join just to feel good. Our lawmakers in Dover must look at the real implications of their decisions and do what is truly best for Delawareans and Delaware businesses. Increasing the minimum wage in the midst of a pandemic that crippled the workforce and businesses alike is not in the best interest of anyone but themselves.