Delawareans have a choice: taxed to death or death to burdensome taxes

Only two things in life are certain: death and taxes. For Delawareans, this isn’t just an old adage, but real life.

Without caution from the people, this will not stop. Only the limited balance in the Delaware senate is currently keeping things in check—but only a little. Delaware’s tax increases over the last two General Assemblies (2016-2018, 2018-2020) were the 6th highest in the nation.

Delaware’s has the highest per capita revenue from corporate license fees and the fifth-highest per capita corporate income tax revenue. Corporate license fees accounted for 12.8 percent of Delaware’s state and local general revenue in 2017 (for comparison, the national average was 0.2 percent), but we risk losing this source of funding if we force businesses to incorporate out of state. 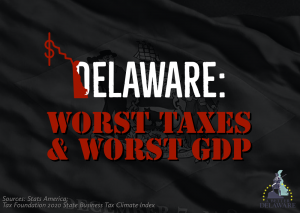 You’ll hear many people tout Delaware’s status as a “tax-free” state, but that simply is not the case. Yes, Delaware does not have the sales tax, but we more than make up for that. Take for example the reason why we are able to avoid having a sales tax: the gross receipts tax.

Delaware is one of only seven states with a gross receipts tax. These invisible sales taxes raise prices as these taxes are shifted onto consumers, and tend to impact lower incomes the most. Moving away from these economically damaging taxes can thus be a part of states’ plans for economic recovery.

As if that wasn’t enough, the state’s individual income tax burden is on the top half of the nation, with one of the highest individual income taxes. This has been an ongoing issue, but the impact of this tax will be felt harder as we continue operating under a COVID emergency order that has wrecked our economy.

Since 2016, Governor Carney approved large tax increases but he did not work alone. The taxes started as bills heard and voted on in Dover that were approved for his final vote.

These bills raised corporate franchise taxes, realty transfer taxes, alcohol taxes, and cigarette taxes. Delaware now has the highest real estate transfer tax in the nation and some of this highest excise taxes among all fifty states.

These tax increases were estimated to raise more than $200 million annually, the exact amount the state claimed was a “surplus” less than one year ago.Over-taxing residents is not a surplus or a celebration to commemorate with additional spending.

Have these measures even been worth it?

No. Delawareans get very little bang for their buck. Our taxpayer return on investment (ROI) is near the bottom nationally, despite having some of the highest taxes per capita. We spend more on education and health care than most other states, yet continue to see outcomes that put us in the bottom of national ranks.

Our representatives are not representing our best interests when they continuously raise taxes, taking money away from hard working Delawareans. The results speak for themselves, and what they’re saying is that it is time to change what we’ve been doing.

In November, Delawareans have a choice: taxed to death or death to burdensome taxes.