Delaware employers and workers are scrambling to get back to normalcy and get back to work. Our economy is suffering and many are left to wonder what will happen to their businesses and livelihoods if lockdowns persists, or a second wave of COVID—19 hits.

Things are tough now, but they have never been easy. Pre-pandemic, Delaware was the 7th worst place to start a businesses and ranked 34th for employment. Many factors contributed to the First State being left in this position, but one stands out: regulations.

As of last year, Delaware’s regulations included 104,562 restrictions, 6.7 million words, and would take 9 weeks to read through—and all of this is in addition to federal regulations. For a small state, that’s quite a regulatory burden. 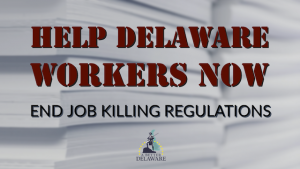 Now, more than ever, we must address our codified limitations to an economic boom and a better business climate. Currently, one out of eight Delawareans included in the labor force are unemployed and the state has lost close to 50,000 jobs since last year.

Governor Carney recently signed an Executive Order creating the Rapid Workforce Training and Redeployment Training Initiative to assist Delaware workers and their families who have lost jobs and income due to the COVID-19 crisis. This program will help identify key areas for employment and implement rapid training and certifications to get people back to work faster.

Other actions like this could be done swiftly to help Delaware workers and businesses.

In last week’s blog, we mentioned the apprenticeship ratios in Delaware that are massive job killers. Other items, such as licensing requirements and permit processes could be fixed through rapid action to reduce the regulatory burden on employers and workers. These regulations hurt the ability for places like barber shops and nail salons to start their businesses.

The state’s prevailing wage sets an artificially high price on contractor wages on government projects, effectively reducing the total number of jobs that are filled and limiting the work that can be done.

Helping independent contractors has been an important issue that has come to light during the pandemic, as many statewide were unable to file for unemployment due to regulations that technically held up the process for benefits to be distributed to these workers. Other restrictions on licensing and independent firms also keep doctors and lawyers from locating and developing their practices in Delaware.

Long term, Delaware should take steps to address its massive regulatory body. Regulatory reform is not a new wave idea springing from the ashes of coronavirus. Notable regulatory reform programs exist in Indianapolis, San Diego, New York City, Colorado, Minnesota, Virginia, and in our neighboring states Pennsylvania and New Jersey. In May 2019, Idaho did an entire regulatory reset, where their state government eliminated all regulations and will only bring back the ones it chooses.

While mimicking Idaho would be a massive undertaking, the state could create an independent reform commission, and address regulations by deciding which are truly beneficial, focus on outcomes instead of processes, simplify regulations to make it easier for businesses to understand, and be transparent in their process.

Last May, a bill was introduced in Delaware that would have required an economic impact statement for regulations, as well as a timeline for review of regulations with an emphasis on minimizing the economic impact they would cause. This bill was stalled in committee and never received a vote.

This should be a consideration for the Delaware legislature in the next legislative session, but more immediate actions like those listed above can be taken now to help Delawareans.

In a move uncharacteristic for our current state leadership during the pandemic, the Delaware Department of Transportation (DelDOT) recently announced new efforts to support small businesses in Delaware. The Small Commercial Entrance process will reduce costs and wait time for eligible small businesses, and an expedited review and approval process is expected before the end of summer.

More businesses and business groups are speaking out about the lack of attention and help they have received from state leadership, after 4 months of the State of Emergency and little clarity or assistance. For small businesses and new businesses, the DOT rule changes are a bit of hope at this time.

If this can be done in the DOT, other agencies could potentially issue rule changes to help employers and workers since the administration refuses.

Businesses have been crying out for help after being forced to shut down, but workers are still suffering through the impact of COVID-19 in Delaware.

Delawareans who were laid off at the start of the shut downs and applied for unemployment in March have yet to receive benefits. Often it is difficult to get an answer when contacting the office for answers or help with payments. Without work and without unemployment being delivered in a timely manner, this has left Delawareans wondering how they will stay afloat for the remainder of this pandemic. This would position the Delaware Department of Labor (DOL), as the next logical entity to make rule changes in order to help struggling Delaware workers find jobs.

A big concern with current DOL anti-business regulations is the mandatory and restrictive apprenticeship ratios that prevents Delaware businesses and contractors from hiring new workers now. 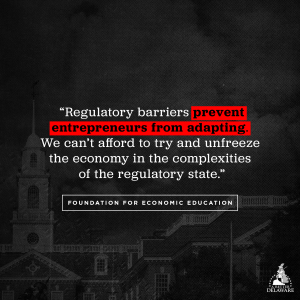 Delaware’s ratio means that you can have 1 apprentice for every 3 journeyperson. Businesses and contractors are not permitted to hire a second apprentice until there 6 journeypersons, and so on as you hire more apprentices. These overly restrictive rules sideline Delaware workers from good paying jobs right now.

For instance, there are close to 30 trades that are restricted to only hire one apprentice for every 5 journeypersons. The DOL touts 1,500 current apprentices, but if this ratio was adjusted to 1:1 or 1:2, this would result in thousands of new hires immediately.

By DOL making this change in the manner that the DOT issued their rule changes to help small businesses, trade workers in Delaware would have more opportunities for employment, and the state could see an increase in total jobs available. There are likely other opportunities for the DOL and other agencies to readdress their rules and regulations to help Delaware’s workers.

State regulations reduce job opportunities and limit the workforce—especially for unskilled or low-skilled workers—and must be addressed in order to get people back to work.

A better Delaware would establish an inter-agency committee immediately to help put Delaware back to work right now.