Four months ago, our world changed.

A recent study State Economies Most Exposed to Coronavirus revealed: 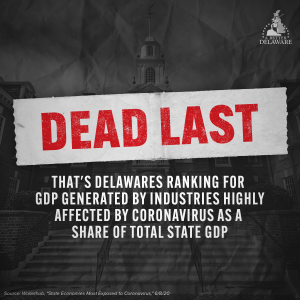 We may be the First State, but we’re last where it counts.

If we look back at studies released in the past two years, it’s clear that Delaware’s economy and business climate were not suited for the corona-crisis.

A study from WalletHub ranked Delaware as the 7th worst state to start a business and the 2nd worst for small businesses. Delaware’s fiscal stability was 45th in the nation and ranked 44thfor overall fiscal health.

At the start of 2020, before coronavirus, Delaware’s economy was one of nine nationally predicted to shrink over the next six months.

The coronavirus forced people out of work and businesses to close their doors—some forever. At first, the effect of or economy was reminiscent of the Great Recession in 2008.

According to the Federal Reserve Bank of Philadelphia, Delaware’s business conditions recovered from the Great Recession at a noticeably slower pace than the rest of the nation, taking three more years to stabilize than the average.

This would mean that a return to our dismal economic position isn’t likely until at least 2023. Unfortunately, it is now clear that the economic impact of COVID-19 is worse than 2008.

What will that mean for Delaware moving forward from this crisis?

First, we hope that this will push Delaware to be more focused on the small and family-owned businesses right here in the state. Instead of being used to play a losing game of corporate welfare, taxpayer dollars could help the businesses in their own communities.

The COVID-19 pandemic should lead to wiser saving and spending habits from our state leaders in the future. During the next legislative session beginning in January 2021, A Better Delaware is looking for more serious consideration and evaluation regarding funding, programs, and expenses, as well as a codified savings plan.

If we use this as a much needed wake up call, we have the chance to truly make Delaware better in the future.