The Delaware Economic and Financial Advisory Council (DEFAC) released the updated revenue forecast for fiscal year 2020 this week, and the outlook is dim. DEFAC estimates show Delaware’s revenues for FY 2020 down by $416M and FY 2021 revenues down by $273.3M, creating a deficit of about $748.7M, but that may not be the final impact.

The sentiment was clear in Monday’s DEFAC meeting: there are many factors in play impacting financial futures. The shape of the recovery curve, process of reopening, unemployment numbers, business closures, use of federal funds, and endless more items can impact the ability to recover from COVID-19. Governor Carney expects as much as $500M to $1B in lost revenues.

For Delaware, the worries don’t stop there. A Federal Reserve Bank of Philadelphia index report predicted Delaware to be one of 9 states with an economy predicted to shrink in the first half of 2020. Delaware also ranks 45thin the nation for short-term fiscal stability, which is bad news for budgeting legislators and struggling businesses and residents.

Before the pandemic, Delaware saw unemployment rise for six months straight and above the national average and was 34thfor employment. Now, more than 71,000 Delawareans have filed for unemployment since the pandemic began, as businesses shut down or laid off workers. 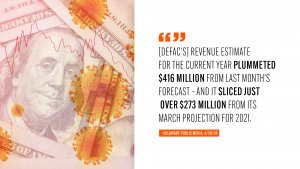 Unfortunately, instead of meeting to make difficult decisions to cut current spending or tap into reserves, our leaders decided to wait for a Hail Mary from federal funding. These funds cannot be used to offset lost revenue, and Delaware’s leaders are scrambling.

Lawmakers faced a similar struggle in 2017, when Delaware’s deficit was close to $400M. Later, in 2018, Governor Carney said:

“We are presenting a balanced, long-term solution to Delaware’s structural budget challenges that will keep Delaware economically competitive. This proposal requires shared sacrifice – and that starts with a commitment by state government to operate more efficiently and spend taxpayer dollars wisely…”

Despite this claim, spending cuts and sacrifices were temporary. The real sacrifice came from Delawareans who saw new and higher taxes totaling $200M in new annual revenue.

When Delaware recovered, the taxes remained and the new “surplus” became an excuse to continue spending.

Now that Delaware faces a deficit that is double what we saw in 2017, Office of Management and Budget Director Mike Jackson says that postponing planned capital projects and accessing reserves may be part of the answer, however, “All options are going to be on the table.”

This signals that the response may resemble 2017, and Delawareans could foot the bill through higher taxes.

In 2017, it was only the state government in crisis. Now, it is every Delawarean.

Taxes should not have been the answer in 2017, and cannot be the answer in 2020. We cannot ask more from those who have already been forced to close their businesses, who have been laid off work, and who cannot afford to answer for the consequences of poor financial planning and action from state officials.

Cutting the $233M in recently proposed one-time capital expenditures, utilizing the $252.4M in Rainy Day Funds and $126.3M in Budget Stabilization Funds, reallocating the tens of millions in the Strategic Fund, freezing agency budgets, suspending budget increases, and a critical look at our spending habits are the key to our recovery.

We have the ability to afford this pandemic without increasing taxes.

The question is: will we?